Ask anyone who has worked on the set of a horror film made in Mississippi and an unexpected unifying theme always comes up.

“Horror can be a lot of fun,” said Hattiesburg native filmmaker Miles Doleac. “Not only because of the cool things that you get to do with blood, makeup and creature effects, but also the type of people who are drawn to horror. They’re generally really talented, cool and fun people to be around.”

Vicksburg native David Matthews agrees. He was director of photography for 2022’s “Glorious,” which was shot mainly in Jackson.

“It was probably the most fun I’ve had on set, because the crew was just fantastic,” he said. “The atmosphere on set was something I’d never really experienced.”

Julie Toche, a Gulfport native and production designer on the shot-in-Natchez film “From Black,” also concurs.

“Horror movies are just fun,” she said. “They’re my favorite. I’ll pass on a bigger project to work on a horror movie that has a decent script.”

But after that, horror productions in the state were few and far between. Save for 1982’s “The Beast Within,” a worthy addition to the early ‘80s werewolf movie resurgence.

Since the establishment of the Mississippi Motion Picture Incentive in 2004, however, there have been over 30 horror films made in Mississippi. The success of the 2004 indie megahit “Saw,” which raked in over $100 million worldwide on a $1.2 million budget, led to an explosion of indie horror worldwide. And the incentive, which offers a 25-35% cash rebate on in-state spending and payroll, has been very attractive to horror producers looking to capture that “Saw”-like lightning in a bottle.

“My office is in L.A. because that’s where a lot of the talent and resources are,” said Bob Portal, managing director and head of production for Alliance Media Partners (AMP) International, a film production, sales, finance and marketing company with offices in London as well.

“There’s still a lot of shooting happening in Los Angeles, but lots of people are looking elsewhere to shoot. I’d certainly recommend going to Mississippi. I think the incentive is good. I like the way it works. It’s not difficult paperwork-wise. And I like that there’s the requisite of connecting with a local production partner. That works very well and saves a lot of the legwork with the application process and finding local resources.”

To date, AMP has produced three horror films in central Mississippi. In addition to “Glorious,” they have completed 2021’s “Jakob’s Wife” and have an untitled film based on a H.P. Lovecraft story in post-production. Both films star horror icon Barbara Crampton of “Re-Animator” fame, who also produced, and recently joined AMP’s staff as VP of Production and Development for the U.S. AMP has also assisted with the sales of two other Mississippi-made films (2018’s “Malicious” and “From Black”).

“We looked at several neighboring states but everything about how the Mississippi rebate program worked seemed easier,” said Thomas Marchese, director of “From Black.” “My producer and I went all over Mississippi looking at locations, and like everyone else who ends up shooting in Natchez, we just fell in love with it. It was a bit coincidental that we ended up working with AMP. We found them on our own then found out they had done ‘Jakob’s Wife,’ so we picked their brains about that. It gave us confidence that someone within our filmmaking family had a prior project in Mississippi that worked out really well.”

Ridgeland-based Eyevox Entertainment served as the local production partner for “From Black” as well as all three films produced by AMP. Eyevox is led by producer and founder Rick Moore.

“I immediately liked Rick’s attitude,” Portal said. “He didn’t oversell Mississippi. In fact, he may have undersold it, because he was very honest about available crew and resources. He had a personal interest in genre films, and also with his other company Certifiable Studios that makes the crazy board games, there was a definite synergy there in terms of sensibilities, of course.”

Moore is also founder of the Ridgeland advertising agency Mad Genius. Matthews’ fulltime job is VP of Production there, but he served as director of photography for all three AMP-produced films. He had proven his talents working on some horror projects for filmmaker Padraig Reynolds, director of 2011’s “Rites of Spring” and 2016’s “The Devil’s Dolls,” both shot in central Mississippi.

“Around 2015, Padraig had reached out to Eyevox for some help doing pickups,” Matthews said. “I shot a few of those and that’s how we developed a working relationship. He had a passion project called ‘Open 24 Hours,’ and found a gas station he loved near Canton where we shot a teaser for an investment piece. It helped him sell it, and a couple months later he texted me and asked, ‘Can you shoot the feature with me in Belgrade, Serbia? This is not a joke.’ I said yes because I was eager for my first opportunity to shoot something a little bigger.”

Matthews also shot Reynolds’ 2019 feature “Dark Light” overseas in the Republic of Georgia. And it was ultimately on Reynolds’ and others recommendation that AMP looked at Mississippi as a filming location during pre-production on “Jakob’s Wife.”

“The big question was where to shoot it,” Portal said. “We did investigate quite a few places, as you often tend to do, chasing the tax credits and the rebates around the country and seeing what people were saying. Padraig was one of the people we spoke to who had shot in Mississippi that recommended it, along with Tom Shell, a producer who had also worked with Rick and Eyevox.”

Mississippi is also fertile ground for homegrown horror. 2019’s “Ma,” a film from horror titans Blumhouse Productions, was directed by Jackson native Tate Taylor and filmed in Natchez. And the Tupelo area was home to two horror productions from local directors: 2017’s “The Atoning” and 2019’s “Driven,” from Michael Williams and Glenn Payne, respectively.

Perhaps the most prolific homegrown horror filmmaker is Doleac. He has produced, written, directed and acted in four horror films made in the state: 2017’s “Demons,” 2019’s “Hallowed Ground,” 2020’s “The Dinner Party” and 2021’s “Demigod.”

“I’ve said time and again, I think the Mississippi film incentive is one of the most attractive that we have nationwide,” Doleac said. “That’s a huge part of the reason why I continue to make films in Mississippi and why I continue to house my production company there, despite the fact I now live in New Orleans and teach film at Loyola University. First and foremost, the incentive is a great reason to make films in the state, especially the nonresident payroll portion, which is great for indie producers.”

Doleac also recently served as a co-producer and production partner for “Devil’s Workshop,” a shot-in-Gulfport horror film that was released in late September.

“One of the things that I was really pleased with on that film is that team came in from all over—New York, L.A., Chicago,” Doleac said. “And they came down here to Mississippi and were incredibly impressed with the local folks that I was able to pull together for them, as well as working with the Film Office for the incentive program. They told me they wouldn’t hesitate to come back down here and shoot another film.”

So aside from the incentive, which has one of the lowest minimum spends in the country at $50,000, what else is there about Mississippi that appeals to indie horror filmmakers?

“Natchez, for example, has so much history,” Marchese said. “Everything’s been there for so long, there’s so much depth and backstory. It’s got this charm. You can kind of get everything you’re looking for location-wise. There’s no shortage of settings.”

“Mississippi just has an old feel,” Toche said. “When you see some of the houses and places here you automatically might think in your subconscious that they’re haunted. And we’ve got a ton of woods. What horror movie doesn’t have woods in it? When we filmed ‘Demigod,’ we filmed in the woods at a campground the whole entire time. All our locations were right there.”

Doleac is particularly proud of “Demigod” because of its locations.

“It’s actually set in the Black Forest in Germany,” he said. “Strangely enough, the Black Forest looks a lot like the Piney Woods of Mississippi. It really clicked on so many levels, in the mood and the vibe that we were able to create. Mississippi has a lot going for it in terms of geographical diversity. And, also, that sort of Southern Gothic creepy thing it has going for it makes it a really attractive place to play.”

“A lot of people cut their teeth on horror films,” Portal said. “Not just below-the-line crew, but also directors whose first feature is a horror movie before they move on to bigger things. You’ve got Peter Jackson, Sam Raimi, even Francis Ford Coppola with ‘Dementia 13’—you name it.”

Toche has also worked as a set dresser and art director on larger Mississippi-based productions like “The Card Counter,” “Paradise Highway” and the upcoming “Joe Baby,” in addition to working on “From Black” and several of Doleac’s projects. Her entryway into the industry was by creating makeup effects for Terror on the Coast, the popular haunted house attraction hosted at Sideshow Props 2.0 in Gulfport, the second location of the New Orleans-based film prop house.

“That’s kind of how I got my foot in the door,” Toche said. “I’ve been doing makeup there since its second year. I started out with makeup but quickly realized that was not what I wanted to do in film. Everything since has been art department. That’s my main career and makeup is my hobby.”

Madison native Nicholas Winstead is a special effects artist living in L.A. who has now worked on a number of high-profile projects like “American Horror Story” and “Bill and Ted Face the Music” as well as Netflix, Disney and Marvel properties.

But his first love is horror movies, and he began by making his own makeup effects in his mother’s garage as a kid. He says it was a full circle moment when he came back home to work on “The Vampire Project,” a horror feature shot in Clinton and surrounding towns in early October. He even made some effects pieces for the film at the same table in that same garage.

“Horror films, and low budgets features in general, are a really fun way to get into the industry,” Winstead said. “It gives you a very comprehensive look at what a larger film set looks like. There’s so much to learn and to explore. And horror, sci-fi or genre movies in general just really feel like what you as a kid probably thought a movie set would be. Like you go to lunch and see a werewolf taking his head off to eat. Or see a bunch of guys in green that are playing the aliens in a sci-fi movie. That just feels like the movies to me. And it makes for a fun day at work.” 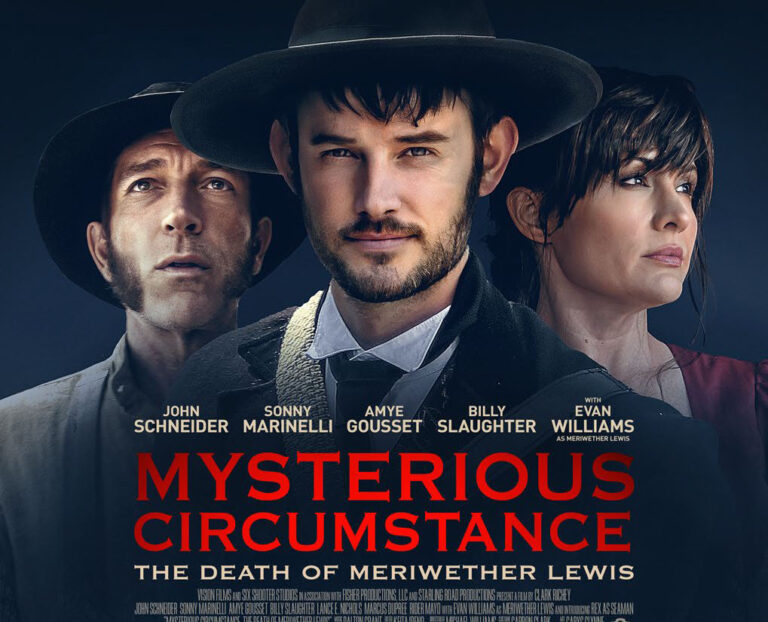 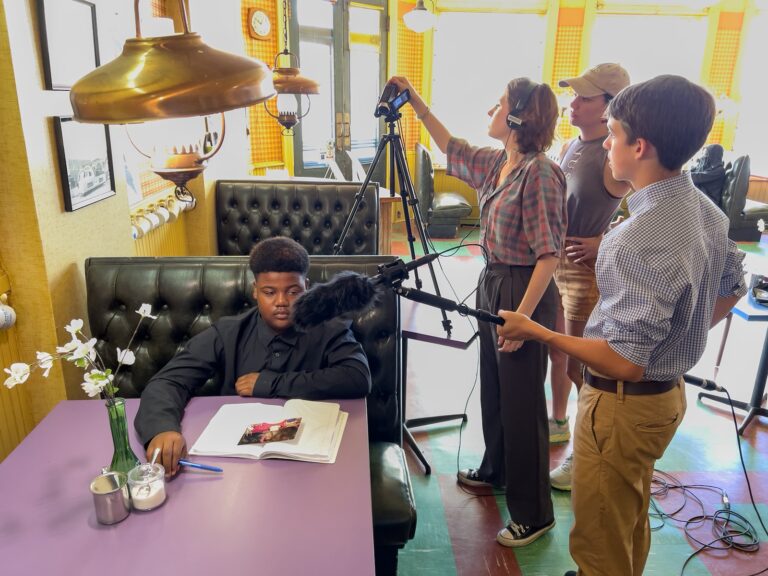